(I'm not going to jump right in to the proposal story; I have to set the stage first.)

This weekend, I moved to Temple. I have been planning to move here so that Rod and I can be closer geographically and so that we can get married eventually. And so a long distance relationship ended after 2 years, 7 months, and 25 days (aka 959 days). We've not yet had time to enjoy our proximity because the entire weekend was spent moving, but we are very excited to be close together.

Saturday, I got into my apartment for the first time. Rodgers lent me a sleeping bag and towels, since mine were in the storage unit in Arlington, so that I could stay the night in my apartment for the first time. I had a car load of stuff with me, that I had carried around while I was being a gypsy, living with different people for the past 2 and a half months. We got all that moved in.

Sunday morning, we left around 7:30 am, went to Arlington, got the Uhaul, loaded up from my storage unit (with the help of Trey and the entertainment of Angela), had lunch with Trey and Angela, saw Melanie Stephens and family at Quizno's, drove to Temple, unloaded and carried stuff up 2 flights of stairs (with the help of Melanie, Ian, and Cal Lemley), waited for Dad to arrive, unloaded my dinette from his truck and carried it upstairs, returned the Uhaul, went to Ihop for dinner, came home, put my bed together, unpacked my kitchen, got a few things in order, then it was about 11:45 pm, and I was ready for bed. But Rodgers would not leave.

He started pestering me, saying that he wanted to annoy me. He wandered around talking about how he wanted to leave but couldn't find his keys. I was too tired to help him look, but I knew he left them on the bar and told him that. He tried annoying me again. Finally I went to the bathroom. When I came back, he was in the same place. He promised not to annoy me anymore and said that I could go to bed now and he would leave. I said, "Great," and sat down where I had been before. As I was taking a drink of water he asked me if I trusted that he wouldn't try to annoy me anymore. I said, "Yes, why wouldn't I?" As I was speaking, he swiftly got down on one knee and pulled out a ring box, in one fluid motion. He said, "Would you marry me someday?" I said, "ARE YOU SERIOUS?!" I had just realized why he had been acting like such a punk and trying to annoy me so that I would leave. And why he pretended to lose his keys. He had to get the ring out of his backpack, and didn't want me to suspect that he was going to do something nice. Once I recovered from this sudden realization that made the past few minutes make sense, I said, "Of course I'll marry you." And he put the ring on my finger. 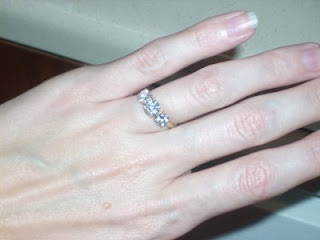