Months ago, I found a recipe for homemade flour tortillas. We have occasionally found some imported tortillas here and there, but they are horrible. Really, extremely unpalatable. I made this recipe a few times. I blogged about it. I tested various methods. A few secrets I would add to that post are these:

The oil. The recipe calls for 2 tsp of vegetable oil. Our vegetable oil here is palm olien. It's ok in the tortillas. I tried coconut oil, but it made them too stiff. EVOO is the best for tortillas, in my experience.

Cast iron. I have a cast iron skillet now. It does a great job! And it is big enough that, when the tortillas are done, I can cook the taco meat in it. Great tortillas, fewer dishes to wash. Win/win! 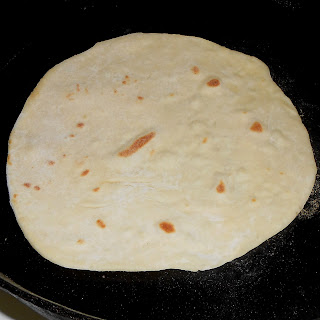 Fluffiness. I don't know the true scientific basis for this, I'm no chemist, but it seems to me that in our warm, humid, coastal Kenyan kitchen, baking powder has super fluffy powers. I have to reduce the amount I use in our pancakes to keep them less than an inch thick. I also reduce the amount in tortillas to 1 tsp.

Floured surface. Perhaps also because of the climate, the dough is either way too sticky to work with or it has too much flour in it to stick together. I use about 1/4 cup of flour re-flouring my hands, rolling pin, and surface as I roll them out.


Most importantly. When I first started making tortillas, I would stack them on a plate when done, covered with a towel. Then we got these nifty insulated serving bowls, with lids. In there, the heat from the tortillas creates a bit of condensation, which helps them retain their chewy texture. I think this has improved my tortilla results more than anything else. I'm assuming it's the same concept as a tortilla warmer. 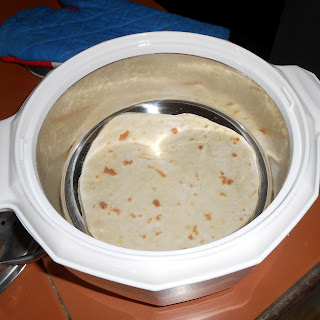 But, this is about taco night, so on to the taco filling.

In Kenya, people don't really eat raw vegetables. We've gotten into the habit of cooking ours, especially if we're having company. It's only natural for our Ken-Tex-Mex tacos to have cooked vegetables in them.

A couple of months ago, I wanted to make cheesy enchilada casserole, but I didn't want to go to the trouble of making tortillas just to put them in a casserole. I had seen recipes for noodle-less lasagna, using slices of zucchini in place of the noodles. I had zucchini. I tried to mimic that for our enchilada casserole. It ended up soupy, so we used it as dip. But it was so yummy, Rodgers asked for it again! I tried it again, but didn't have the zucchini that day. It was not as good. We realized that ground beef + taco seasoning + zucchini = a winning combination. Thus, our taco meat recipe includes zucchini. And it is so, so yummy.

Prep the above ingredients in a large saucepan while the tortilla dough is resting. Put it on to simmer while cooking the tortillas. 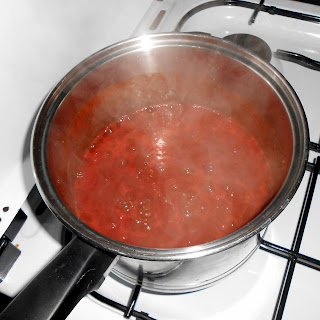 Prep while the tortilla dough is resting (or get your husband to do it while you're cooking tortillas, like I did). After the tortillas are done, wipe out any flour left in the skillet with a clean towel. Heat oil, then add above ingredients and saute until done. Add to the tomato sauce (which is still simmering). 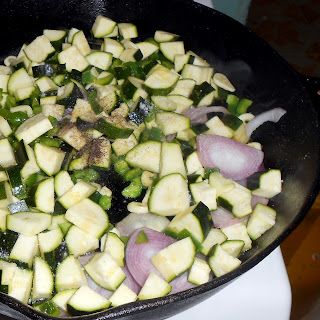 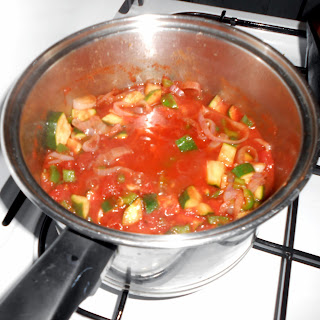 Brown the meat with some salt (I always add the salt to the meat, rather than the sauce, don't ask me why - that's just when I remember to do it!). When it is done, drain and spoon into the sauce. Continue simmering. Do a taste test. I'm never sure quite how much spice I want to use, so I keep tasting and adding more spice. For the dip, I use the same amount of tomato sauce, but half the zucchini, half the meat, and top with cheese. Mmmmm, boy. 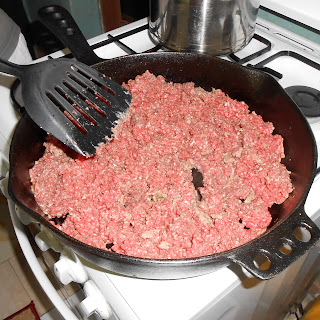 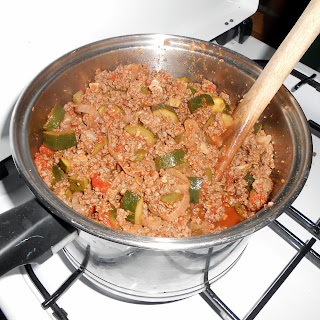