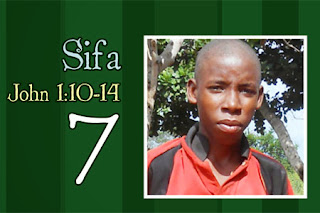 Sifa is one of Japhet’s brothers. He is another who will be starting his last year of primary school in January. His school has a boarding facility for the 7th and 8th graders so that they can focus on their studies without the distraction of all of the jobs they would have to do at home.

For Sifa as he completes this very important year of primary school.

John 1:10-14 10
He was in the world, and the world was made through him, yet the world did not know him. 11 He came to his own, and his own people did not receive him. 12 But to all who did receive him, who believed in his name, he gave the right to become children of God, 13 who were born, not of blood nor of the will of the flesh nor of the will of man, but of God.
14 And the Word became flesh and dwelt among us, and we have seen his glory, glory as of the only Son from the Father, full of grace and truth.